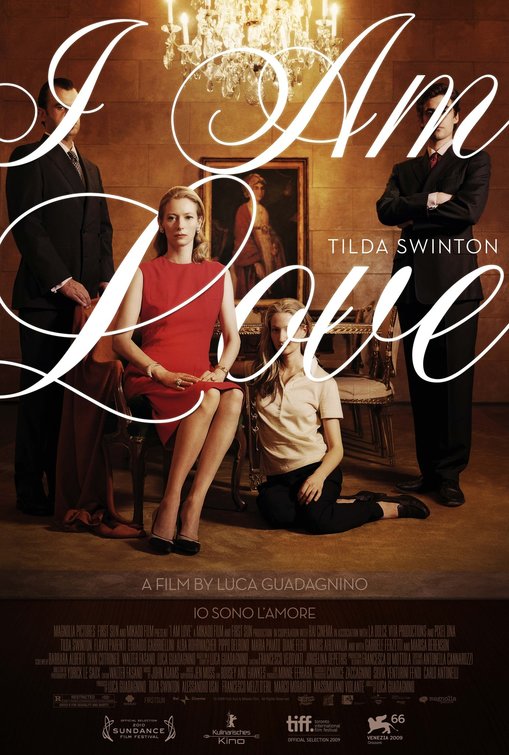 I think it'd be fair to call Luca Guadagnino's film "I Am Love" one of the most critically hypeds of the year. On the internet at the very least, it seems as though everybody who watches it falls head-over-heels with it. So, by the time I finally got around to watching it, I already had this expectation - this idea in my mind that I was going to be simply blown away. As a consequence of this expectation, I also developed a tinge of unwarranted bitterness towards the film. Quite simply, though I was expecting to be blown away, I think a subconscious part of me wanted to dislike the movie, so I could emerge as one of its few detractors.
This is, probably, why it took me so long to really develop an opinion on the film. Immediately after watching, though I was enthralled by the closing scene, I was already formulating what I believed to be the negatives in my head. Of course, it wasn't very easy to think of negatives, but I managed to scrounge a few up - "the story was cliche," I thought, cynically. "Too much melodrama - it's a boring premise cloaked in pretty cinematography and acting." I further went on to think, "if it wasn't Italian, and if Tilda Swinton wasn't the lead, nobody would care."
But, something felt false about these assertions. Namely, the fact that in reality, I didn't actually believe my own "opinions". Instead of officially denouncing the film with a review, I decided to let it simmer, and like the food in the film, the more it did so, the tastier it seemed. The things I liked about the film began to emerge. Tilda Swinton was, as usual, fabulous, in a language that wasn't even her own. Her conflicted and complicated Emma was a brilliant creation.

Besides Tilda, there were other fantastic things about the film that kept nagging away at my more bitter side. That cinematography, that art direction, that score, that Alba Rohrwacher, that final scene - especially that final scene. I began to realize that perhaps, I loved the movie more than I initially allowed myself. The "cliche" story and the melodrama began to seem less and less like issues, and instead, things that allowed the romance to blossom from the film's own cinematic beauty. Even the particular plot point near the end that I once considered ridiculous seemed like a non-issue.
So here I am now, proclaiming that in fact, I find "I Am Love" to be a gorgeously crafted piece of cinema, a romance whose surface simplicity is in no way a hindrance. The characters are complicated, and interesting - the fact that the movie is able to feel so minimal is a testament to how masterfully it was directed. As I said above, Tilda Swinton, who gave my favorite female performance last year, does marvelous work which is to be expected. Alba Rohrwacher's
absolutely devastating final glance at the camera is probably one of the best shots of the year. It's a gorgeous film.

All that aside though - how much can reviews and, perhaps even a little bit of blogging-peer-pressure, affect our perspective of a film? I had to cross this wall that I'd built for myself in order to truly discover how I felt about "I Am Love" and I find it strange that I couldn't respond to my feelings directly. How do you cope with pre-watching buzz and expectations? Respond below, I find this to be a rather interesting and relevant topic for all of us who want to intelligently and personally watch and experience cinema.
Posted by Robert at 5:36 PM