I haven't been the most faithful moviegoer in 2011 - out of all the movies I've wanted to see (I still haven't seen Insidious, Bridesmaids, Kung Fu Panda 2, Rio, Meek's Cutoff, and Incendies, among others), I've only caught a meager 11. However, it's been over half a year and I've seen enough good to do a little tribute to some of the performances. In part 2 we'll talk about the ladies, but let's start with the men (and in some cases, boys).

Michael Fassbender and James McAvoy in X-Men: First Class
As the power duo at the forefront of First Class, Fassbender and McAvoy work wonders with the only average material. Their chemistry is immaculate, thus making the moments of tension in their relationship so much more effective. Seeing two such interesting actors in a context as surprising as a superhero movie is rife with possibility and these two took advantage of this opportunity to the fullest.

Brad Pitt in The Tree of Life
The Tree of Life isn't really about the acting. It's not really about the cinematography either, or the screenplay, or any other individual element. It's about everything coming together in perfect symmetry to bring Terrence Malick's vision to the screen. That doesn't mean each element isn't perfect though, and Brad Pitt's quiet and subtle performance in the film is no exception. Pitt is one of the most famous actors of our time yet he sheds all fame for this role as a troubled father. His opening mourning scene is one of the best of his career and though we don't really get a lot of information about his character's backstory, Pitt seems to know it all. it's truly moving work that proves that Brad Pitt is just as respectable an actor as he is a figure of pop culture. Hunter McCracken in The Tree of Life
If there's a "lead" role in The Tree of Life, it's newcomer Hunter McCracken's role as Jack. Not only does McCracken synergize perfectly with his older counterpart Sean Penn, but he carries every single moment of his screentime with uncanny naturalism. Where most child acting is characterized by over the top theatrics, McCracken gives as close to "de glam" as possible. It's hard to believe that this kid is actually NOT the character in the movie, and it's a shame that McCracken will probably not be in awards discussion later on this year. If only he was a little girl! 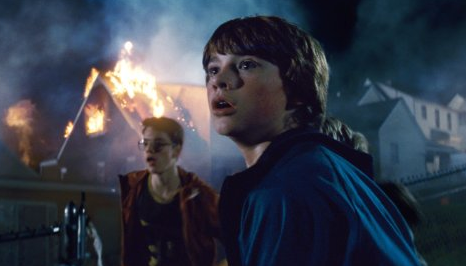 Joel Courtney in Super 8
Joel Courtney's work in Super 8 is almost the polar opposite of his similarly aged colleague Hunter McCracken's previously mentioned work, but it is still worthy of commendation. Courtney is as unpretentious as possible, embodying the ideal child that every audience member can relate to. He can go from being hysterically funny to completely sympathetic within seconds, and his blaring innocence works perfectly for his role. It should be interesting to see where he goes next.

Chris Hemsworth in Thor
Okay, okay, I know what you're thinking, and sure, Hemsworth's work in Thor is not even close to being on the same level as, say, Brad Pitt's aforementioned performance. Yet, I still felt a need to mention him here - in a role that is characterized by steely masculinity and almost nothing else, Hemsworth manages to add a level of charisma and charm that was unexpected and truly welcome. The fact that he's taking the film seriously - but not too seriously - is a big part of why his performance works. He allows himself to be funny, passionate and even at times ridiculous, all to the benefit of the overall film, which would have been a lot less fun to watch had he not been doing so well in the lead.
So there you have it - a few of my favorite performances so far. What were yours? Disagree or agree with anyone on the list? Comment below!
Posted by Robert at 6:04 AM 6 comments: Perhaps the most interesting part of my experience watching "The Tree of Life" (besides the movie itself) was the utter quietness that fell upon the crowd after the credits began to roll. The previously boisterous group was now whispering, if not completely silent. I personally didn't want to say anything after seeing the movie, I just wanted to continue reflecting inward - because that's what this movie does. Malick's gorgeously shot meditation on the transience and insignificance of human life is on such a high level of cerebral and emotional comprehension that instead of merely throwing ideas at the viewer and hoping they stick, it pulls the things it wants to say out of the very soul of the viewer, allowing its philosophies to float and eventually take root. Though one could argue that the film is borderline gratuitous in its spiritual self-importance, the meticulous beauty of every single shot allows the film to never drift into languishing boredom. In a movie so structured around conversations with God, Malick has become God himself - he has created a timeless universe that despite its period implications, exists in its own realm, and has allowed his fascinating characters to simply exist. In short, it's a piece of art, the catalyst for important philosophical discussion, and a masterpiece.
10/10
Posted by Robert at 1:05 PM 3 comments:

Of all the penguin movies out there, this may just be the worst. It's certainly not offensively bad by any means, but it is almost intolerably annoying, due largely in part to Jim Carrey's performance as the title character. I truly like Carrey's acting in even some of his worst movies, but here he's a mess - the screenplay is basically a series of fragmented ideas and jokes and in what can only be interpreted as a desperate attempt to make these fragments work, Carrey overacts to the point of idiocy. At one point, Carla Gugino's character sincerely states "you're a complicated man, Mr. Popper", a factoid both Carrey and the screenwriters clearly forgot to explore, despite the latter's desperate attempts at fleshing out the character with daddy and ex-wife issues. What is perhaps even more troubling is the confusing morality at play - the Penguin Expert, who is truly just doing what he can to help the penguins, is portrayed as evil, whereas Mr. Popper, a man who egregiously concludes that his New York apartment is a suitable place for Antarctic life is portrayed as a hero who can bend the law at will. Of course, it's not all terrible. Carla Gugino actually makes good of her meager character and a few of the gags are actually extremely successful (especially the Guggenheim scene, which was just the right amount of ridiculous). In addition, the CGI penguins were undeniably adorable and surprisingly convincing. However, even though my target-audience-younger-siblings liked it, I do find myself worrying for the state of family cinema. If this kind of mindless, shallow filmmaking is what children are becoming used to seeing, more interesting family films are going to be come increasingly unaccessable.
4/10
Note: I have not read the book, but I have a hard time believing that a Roald Dahl novel could have been this vapid.
Posted by Robert at 9:20 PM No comments: I hate apologizing for not posting but seeing as I haven't done so in a couple of weeks I thought I'd let you all know that I'm fine - I've been feeling a particularly lazy streak, coupled with transitioning into summer + my newfound obsession with watching the show "Damages" on Netflix. Which, I love. If any of you are fans of the show, please sound off below - Glenn Close and Rose Byrne are so fantastic! Anyway, look out for reviewish type things of "Super 8" and "X-Men" soon, along with another addition to the Catherine O'Hara project. Carry on!
Posted by Robert at 10:24 PM 5 comments:

A quick question about X-Men. I have a question for all of my amazing readers. I'm desperately looking for a movie to see this weekend, and since I'm back at home in the middle of Florida my options are kind of limited. The cast of "X-Men: First Class" is very appealing and I think it looks like it could be a fun movie to see.
The problem is, I haven't seen any of the other X-Men films.
So my question for you guys, who have seen the films or have a bit more knowledge than I of the franchise - do you think it would be acceptable to see "First Class" without having seen the other three movies? Responses below!
Posted by Robert at 8:53 PM 7 comments: