It's common sense that the movie blog world is full of people with good taste in film. But what I've also found out is that it's also full of people with great taste in books as well, and it's interesting to see what everyone has read and enjoyed as of late!
Personally, I recently finished both the "Millenium" and "Hunger Games" trilogies, both whose movie adaptations have been getting some attention lately, and both of which I enjoyed immensely. As far as "The Hunger Games" goes, I'm really excited about the movie. I could be biased since I already knew about Jennifer Lawrence's casting before I started reading, but I think she'd be the perfect Katniss. I've now just started "Oldest Living Confederate Widow Tells All" which is so far very charming and humorous.
So how about you guys? What have you been reading lately? And any recommendations for me? The comments are open to all!
Posted by Robert at 1:54 PM 3 comments: 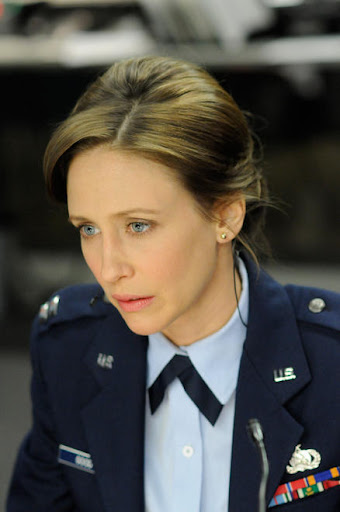 I'm not sure if it was the train-centric opening credits, the Herrmann-ian score by Chris Bacon, the enigmatic female performances from Vera Farmiga and Michelle Monaghan, or something else entirely; but while watching Duncan Jones's "Source Code" I could not help but be reminded of an Alfred Hitchcock film. "Source Code" is not really on the same level as most of Hitchock's filmography, but it wouldn't be difficult to imagine the king of suspense making a movie rather similar to it if he was still alive. Needless to say, the film is smartly, stylishly, and suspensefully put together (helped greatly by its brilliant minimalist structure) and makes for an extremely entertaining hour and a half. However, beyond that hour and a half, the film isn't particularly memorable, perhaps because it skirts around the philosophical questions that it seems to want to ask and never really asserts itself visually. The most lasting aspect of the film is, unsurprisingly, Farmiga's performance - unbelievably complex, gorgeously layered and quietly powerful, her eyes say everything the overall film fails to.
7/10
Posted by Robert at 7:12 AM 7 comments: 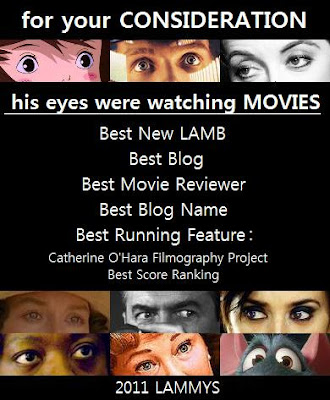 As most of you probably know, I'm a proud member of the Large Association of Movie Blogs, AKA the LAMB. Anyway, every year they do their own member-voted awards for movie blogs. This is my first year in the running, so I'd appreciate it if you guys could go over here and read about the process and vote for me (if you think I deserve it, of course)!
Also, I'd also really appreciate it if you guys looked over to my right sidebar and browsed through all of the blogs over there. Most of them are also members of the LAMB and all are fantastic blogs who are super deserving of your attention and votes during the LAMMYs.
Good luck everyone!
Posted by Robert at 10:17 AM No comments:

Labels: All About Me, awards season, LAMB

Having watched "Confessions" and "Half Nelson" both in a short period of time, it was impossible not to compare the two. Both movies are about teachers - teachers who are slightly unhinged, slightly off. However, though both movies deal with a similar central character, the two movies could not be more different. Japan's Oscar submission from last year, Confessions, is a dark and frightening tale of a teacher, Ms. Moriguchi (Takako Matsu) whose young daughter Manami was killed by two students in her homeroom class. Ms. Moriguchi decides to take revenge on the two boys in what becomes a tense web of mind-games and manipulation, structured in a series of "confessions" from one of the accused students, the mother of one of the accused students, and a sympathetic and introspective young girl in the class.
Half Nelson is the story of Brooklyn junior-high school teacher Dan Dunne (Ryan Gosling), whose philosophical approach to teaching inspires his students but isn't quite in line with the curriculum. However, despite his success in the classroom, his own life is simply a mess - he has a debilitating drug habit, poor relationships with others, and he cannot seem to turn his life around, until he meets Drey (Shareeka Epps), an impressionable young girl with problems of her own, who he befriends. The most striking difference between the two movies is how each of the imperfect teachers deals with the problems that surround their life - rather, how each teacher uses their class as a kind of therapy. For Gosling's Dan, his students are the only thing that keeps him going, the only part of his life in which he is able to have some control and success. On the other hand, Ms. Moriguchi's problems are caused almost completely by her class, and her path to equilibrium consists of the complete destruction of at least two of her students.
One of the most interesting illustrations of this contrast between the two characters is how the "chaos of the classroom" is portrayed. Throughout the entire exposition of "Confessions", Ms. Moriguchi has to fight to be heard over the obnoxious chatting, texting, and outright disrespect that comes from her pupils, making us completely sympathize with how much she hates these kids. Though Mr. Dunne's students are just as noisy and rambunctious, their din is one of creativity, of excitement and of learning - an almost healing bedlam.
In fact, one of the most frighteningly brave aspects of "Confessions" is how it has no qualms with portraying children as pure evil. These kids are unflinchingly rude, manipulative, dishonest, hateful, and even murderous. It's an exaggeration, perhaps, but surely all teachers have felt the kind of disdain for their young pupils that the audience feels for the kids onscreen. It's a brilliant technique that creates an unyielding discomfort. Moving past the content itself though, both movies are cinematically commendable as well. Matsu and Gosling both give fantastic lead performances, and the supporting casts, be they the evil children of "Confessions" or the supportive students in "Half Nelson", are really strong. "Confessions" is stylish to the point of being almost arbitrarily so, but for the most part it works, and "Nelson"'s camera work is unique and smart, often times focusing not quite where you'd expect.

Okay, so, neither of these movies really have anything to do with each other. They don't really belong in the same genre, and their plots are radically different. But they're both such fascinating portrayals of teacher-student dynamics that they become unintentionally perfect companion pieces, both of which I highly recommend.
Have you seen "Confessions" or "Half Nelson"? Which portrayal of classroom dynamics did you prefer? Is there an even better school-related movie? Sound off below!
Posted by Robert at 11:00 AM 1 comment:

All I can say to this trailer is...OHMYGOD. I mean, it's perfect. The ominous orchestral background music, the what-looks-to-be-amazing acting from Gainsbourg and Dunst (yay Dunst! finally getting something good) and the whole "there's a planet about to hit us" thing to top off the drama - it's perfect. Sure, Lars scarred my emotions for life with "Dancer in the Dark" but this looks like it could just be his best film yet.
Any thoughts? Lars lover or rabid dissenter? Is there Oscar in Kirsten Dunst's future? Comments below!
via here!
Posted by Robert at 9:04 PM 6 comments:

The awesomeness of the cast kept causing me to flip out. Julianne, Emma, Ryan, Marisa and Steve? Really, it's perfect - especially since all the couples look like they'll have amazing chemistry (Emma and Ryan! That's so cute!) it looks like the humor might fall into the trashy/cheap laughs category, but I have a feeling that the amazing actors will make it all work. I mean, you really can't go wrong with these people. To guarantee the amazingness, the trailer features Grizzly Bear music, so, I mean, there you go.
Your thoughts? Amazing cast with a ton of potential, or trashy-derivative summer comedy? Sound off below!
Posted by Robert at 6:34 PM 4 comments:

Teen-horror is a subgenre that seems to be synonymous with bad acting, poor plot development, and the mindless slaughter of a bunch of stupid and unlikable characters. Sean Byrne's film "The Loved Ones" could be considered a teen horror - it does revolve around a school dance - but it conforms to none of these parameters, succeeding rather brilliantly in its uniqueness.

The film's plot is relatively simple - Brent (Xavier Samuel), who was recently involved in a car crash that resulted in his father's death, turns down the invitation of a seemingly shy girl Lola (Robin McLeavy) to the school's end-of-the-year dance. Lola's daddy (John Brumpton) then kidnaps Brent, who them becomes a victim of horrendously violent and gruesome acts of torture at the hands of this macabre father-daughter team.
However, though the majority of the film's running time is occupied with grisly and painful-to-watch torture, it never descends into a gruesome conventional territory in its delivery. Lola, who seems to be the mastermind of the deadly acts, is a stunningly interesting character. Though she's repulsively evil, she's also extremely adorable, a feature that Robin McLeavy totally takes advantage of, with help from director Byrne, who dresses her up in a pink dress and paper crown and proudly shows her listening to a cutesy song whose lyrics declare "am I not pretty enough?".
McLeavy's performace is brilliantly wacky and off-kilter. It's such a unique piece of work that one would be hard pressed to find anything really like it - perhaps the closest character comparison would be "Misery's" Annie Wilkes, though McLeavy never tries or comes close to emulating her. Instead, she captivates the screen with an irascible and incomparable presence. It will be fascinating to see where she goes next.

The true accomplishment of the film, however, is Sean Byrne's daring and captivating directorial style. Unlike so many other horror movies who use a clicheed gritty and muted color palate, Byrne isn't afraid of utilizing color and lighting to create tension. For example, the disco ball which is ever present in the torture room is perfectly unsettling, as is the fact that the torture room is actually Lola's living room - a subtle detail that makes a huge difference. It's Byrne's unflinching vision that keeps the movie from falling too deep into unwatchable torture porn territory.
On the other hand, the film does occasionally fall into convention and like any good horror movie, it has its wee plot holes. Plus, the ending feels a bit abrupt - a cop-out that misses out on some potential profundity. However, the problems are so minor and inconsequential that they can easily be overlooked. The film is so successful - it draws you in, violently shakes you up, and never quite lets you go.
See it: If you're in the mood for a smart and bloody horror movie or you want to see a really indescribable female performance.
Skip it: If you're a bit squeamish. The movie is a cringe-fest! I literally had nightmares the night I watched it. This is not for the faint of heart.
8/10
Posted by Robert at 6:12 PM 1 comment: Hey everyone, so, Andrew from Encore Entertainment is hosting another installment of his great series LAMB Recasting at the Large Association of Movie Blogs.
This time, he requested that we all try to recast the massively-cast "Magnolia", which was certainly no easy feat, especially that Julianne Moore role. I mean, nobody could possibly do it better than Julianne.
Anyway, I and three others tried our hands at it and now it's your turn to vote so I encourage you all to go over yonder and vote for your favorite re-imagining of the cast. Click here to do so!
Happy voting!
Posted by Robert at 10:50 AM 1 comment: