I have a sad confession to make - before this past week, I had never seen a single film by Ingmar Bergman. While browsing the library of the Banff Centre (where I am currently doing mad piano stuff) I came upon a large collection of his films, and realized that it was time. So, here are my thoughts on two of his films.

Persona (1966)
I'm a big fan of "Mulholland Dr." (which was influenced by this classic), so obviously I would end up liking this mind-bending tale of two women whose personas begin to meld. Bibi Andersson's performance is really quite something to behold. She gives her character everything that it needs from beginning to end.

Additionally, many of the cinematic techniques that Bergman uses are just hauntingly good. The frightening montage of disturbing images at the beginning is perfect for setting up the mood of the film, and some of the influential imagery (like the melding of the two faces) is just monumental. It's amazing how Bergman gets into the heads of these characters in just about 80 minutes. A haunting piece that still lingers in my mind.

This film is a simply beautiful piece of work that truly gets under the skin of two very complicated characters, and shows how a mother and daughter can truly destroy each other. Liv Ullman and especially Ingrid Bergman both give appropriately lauded performances. Both of them know when their characters need to lie to give the impression of happiness, and it is simple brilliance.

I think I preferred this to "Persona" simply because I was more easily able to relate to it. Obviously the fact that the movie had to do with a concert pianist helps, but it's also interesting because it does show what a performer has to give up to achieve success. It's an excrutiating career, that can take a toll on even those you love the most.

By the way, amazing, AMAZING performance by Lena Nyman. I know it's the same old mental-disability thing that everyone would consider Oscar bait, but she does it so well and with so much sensitivity. At first I questioned the manipulative nature of using a mentally disabled girl as a plot point, but Bergman definitely makes it work. Oh, and beautiful cinematography as well.

In both of these films, I find it fascinating how Bergman studies the way that human beings put on a facade in order to appear "all right" for those who they want to satisfy, and how this false display of contentment hurts more often than it helps. Instead of honesty, we lie to those we love and it frays relations to the utmost. Both of these two Bergman classics examine such complex human relationships in such different ways, with compact skill and brilliant acting.
I can't believe I've missed out on the work of this genius for so long.

What are your thoughts on these two films, and Ingmar in general? Do you love him, or are you one of his dissenters (are there any? please speak up if you are one!)?
Posted by Robert at 11:19 PM 2 comments:

Hey, hey, hey my wonderful readers! In case you haven't noticed in the past 2 months or so, my banner has changed! And now that I have steady access to a computer and a bit of free time on my hand, it's time for...you guessed it...

Anyway! Here are the rules.

Anyway, there you have it! I think it's actually quite a bit easier than last time, so go at it everyone! You have two weeks. Starting...now...GO!
Posted by Robert at 9:35 PM No comments: 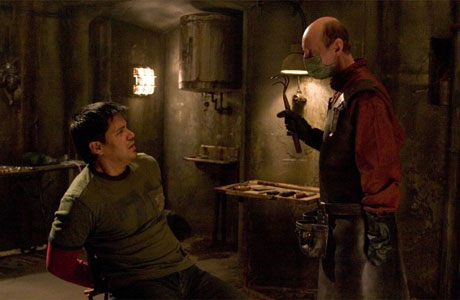 Um...yeah. So, usually my music festival compadres have better taste but this year everyone was all into "scary movies" so I was forced to watch this pile of garbage. Not only is there zero ounce of compelling plot, but the entire point of the movie is to SHOCK! and SCARE!, and though it's gruesome and bloody and violent and "disturbing", I was not once drawn in to the point where I was affected in any way. In fact, I found the movie more sad than anything. Why do I, or anyone else, want to watch innocent people getting tortured? There's not one single thing about that that's fun in any way. Not even in a group of overzealous music students.
On that note, I will say that I loved the little group of kids that was in the movie. So funny. Also, some of the technical features (art direction, and I liked the muted colors in the camerawork) were quite good, and the score was utilized well. I also sort of liked Jay Hernandez's "performance". But other than that, ugh. A complete waste of time, money and my attention span!
3/10
(that's so generous)
Posted by Robert at 9:06 PM 3 comments:

Sorry about the lack in posts everyone! Music camp is mucho busy. I'll do some posts on the movies I've watched so far eventually, but it's been crazy. Anyway, what's going on in the movie world right now? I feel so horribly disconnected. I'm hoping to see "Inception" next week though. GAH!
Posted by Robert at 4:43 PM 2 comments:

When I recently rewatched "The Incredibles", I was surprised to notice a slew of things that I had overlooked in previous viewings. "Incredibles" was my favorite Pixar film when it came out - it's a great story and it's a lot of fun on first viewing. But this most recent time, being older and wiser, and having seen it probably 5 times before, there was so much more to realize about the film.

First of all, the storyline is incredibly deep, and the characters are so remarkably layered, which is rare for an animated family film. Just think about it - the main plot revolves around a super hero's midlife crisis and how it affects his family. (You could almost say it's a family-friendly version of "American Beauty" with superheroes and a happy ending. Sort of.) Beyond that, however, the film paints the very complex portraits of several relationships, and the people within them.

Bob and Helen Parr (AKA Mr. Incredible and Elastigirl) are dealing with the trials of marriage, while their children have to deal with being repressed superheroes growing up in a dysfunctional family. The villain, Syndrome, was once a naive child whose entire outlook on superherodom was destroyed, disillusioning him to the point of becoming a super villain. His relationship with his proposed lover, Mirage, is also shown as being extremely strained (it's a small moment, but we learn so much after he doesn't attempt to save her from Mr. Incredible).

On a technical level, the animation is noticeably not as advanced as current Pixar films. However, the animators make some wonderful achievements. One feature of the film is the unbelievable expressiveness that is displayed by the character's eyes and body motions. In a live action film, the small touches of an actor can express so much - thankfully, Brad Bird did not let his medium limit his power to convey emotions that way. So many times (especially with Mirage and Mrs. Incredible) the expression shown through the characters could rival the performance of a live actor.

Finally, the voice acting is some of the best in a long time. Pixar films always have great vocal performances, but you'd be hard pressed to find better than this. Holly Hunter, especially, does great, emotional work that transcends the barrier of the medium to create affecting work. Brad Bird himself is hysterically memorable as Edna Mode, and I was surprised to find out that Sarah Vowell, frequent This American Life contributor, provides the voice for Violet, which I love.

Of course, on multiple viewings, the flaws of a film start to come through as well. There are a few plot holes, and admittedly disturbing moments (is...Dash...killing those people...and enjoying it? He's just a little kid!). But they are so, so small and insignificant that they are easily dwarfed by the spectacular achievements the film reaches. Like most of Pixar's releases, "The Incredibles" was a revolutionary film that resonates even more powerfully on repeat viewings.

How do you feel about The Incredibles? Am I thinking into this too deeply, or am I spot on? Comment BELOW!
Posted by Robert at 9:00 AM 3 comments: